There has been a centre of Christian worship on this site from at least the 12th century.The parts of the medieval church which survive today are the tower, some of the   nave arcading (mid-15th century) and the Bishop West Chapel, built in the early 16th century by Putney resident, Nicholas West.

During the Civil War, the headquarters of Oliver Cromwell’s army was briefly located in Putney. In 1647, meetings of the Army Council were held in the then Chancel of the church. These discussions on the future government of the realm were published as the “Putney Debates”.

The  Victorians substantially rebuilt and enlarged the church in 1836; it then featured an east – facing Altar, galleries on three sides and box pews.

In 1973 an arson attack gutted much of the church. Rebuilding was not completed until 1982, when the church was re-hallowed by the Bishop of Woolwich, on February 6th.

Some of the pillars and arches, including some of the angels, are medieval, but both north and south arcades were widened in the rebuilding of 1836.

During the restoration of 1982, the altar and the sanctuary were moved to the north side of  the church, the pews replaced with chairs, and the orientation of the church turned through 90 degrees. The architect of the restoration was Ronald Sims; the stained glass windows designed by Alan Younger. 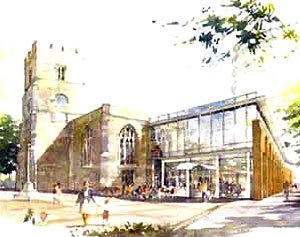 Today the church  sits alongside a striking two storey glass building which was designed to accommodate the ever increasing congregation and to provide enhanced community space for many local groups and organisations.

The  architect of the building was Alan Pates and it was officially opened on 21st September 2005 by The Rt Revd Dr Tom Butler, Bishop of Southwark.

To subscribe to our ‘Church Mouse’ updates, please click the link below and fill out the subsequent form.

We have a separate website for our partner church in the Parish of Putney.

Can't find what you are looking for?

Fill out the form below and someone will be in touch to answer your query.

This website uses cookies to improve your experience while you navigate through the website. Out of these cookies, the cookies that are categorized as necessary are stored on your browser as they are essential for the working of basic functionalities of the website. We also use third-party cookies that help us analyze and understand how you use this website. These cookies will be stored in your browser only with your consent. You also have the option to opt-out of these cookies. But opting out of some of these cookies may have an effect on your browsing experience.
Necessary Always Enabled
Necessary cookies are absolutely essential for the website to function properly. This category only includes cookies that ensures basic functionalities and security features of the website. These cookies do not store any personal information.
Non-necessary
Any cookies that may not be particularly necessary for the website to function and is used specifically to collect user personal data via analytics, ads, other embedded contents are termed as non-necessary cookies. It is mandatory to procure user consent prior to running these cookies on your website.
SAVE & ACCEPT